What’s It Worth? All-American Gems 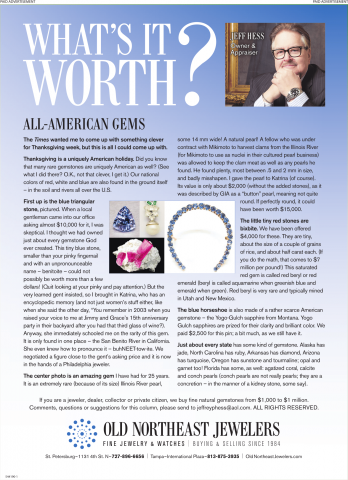 The Times wanted me to come up with something clever for Thanksgiving week, but this is all I could come up with. Thanksgiving is a uniquely American holiday. Did you know that many rare gemstones are uniquely American as well? (See what I did there? O.K., not that clever, I get it.) Our national colors of red, white and blue are also found in the ground itself – in the soil and rivers all over the U.S.

First up is the blue triangular stone, pictured. When a local gentleman came into our office asking almost $10,000 for it, I was skeptical. I thought we had owned just about every gemstone God ever created. This tiny blue stone, smaller than your pinky fingernail and with an unpronounceable name – benitoite – could not possibly be worth more than a few dollars! (Quit looking at your pinky and pay attention.) But the very learned gent insisted, so I brought in Katrina, who has an encyclopedic memory (and not just women’s stuff either, like when she said the other day, “You remember in 2003 when you raised your voice to me at Jimmy and Grace’s 15th anniversary party in their backyard after you had that third glass of wine?). Anyway, she immediately schooled me on the rarity of this gem. It is only found in one place – the San Benito River in California. She even knew how to pronounce it – buhNEET-tow-ite. We negotiated a figure close to the gent’s asking price and it is now in the hands of a Philadelphia jeweler.

The center photo is an amazing gem I have had for 25 years. It is an extremely rare (because of its size) Illinois River pearl, some 14 mm wide! A natural pearl! A fellow who was under contract with Mikimoto to harvest clams from the Illinois River (for Mikimoto to use as nuclei in their cultured pearl business) was allowed to keep the clam meat as well as any pearls he found. He found plenty, most between .5 and 2 mm in size, and badly misshapen. I gave the pearl to Katrina (of course). Its value is only about $2,000 (without the added stones), as it was described by GIA as a “button” pearl, meaning not quite round. If perfectly round, it could have been worth $15,000.

The little tiny red stones are bixbite. We have been offered $4,000 for these. They are tiny, about the size of a couple of grains of rice, and about half carat each. (If you do the math, that comes to $7 million per pound!) This saturated red gem is called red beryl or red emerald (beryl is called aquamarine when greenish-blue and emerald when green). Red beryl is very rare and typically mined in Utah and New Mexico.

The blue horseshoe is also made of a rather scarce American gemstone – the Yogo-Gulch sapphire from Montana. Yogo Gulch sapphires are prized for their clarity and brilliant color. We paid $2,500 for this pin; a bit much, as we still have it.

Just about every state has some kind of gemstone. Alaska has jade, North Carolina has ruby, Arkansas has diamond, Arizona has turquoise, Oregon has sunstone and tourmaline; opal and garnet too! Florida has some, as well: agatized coral, calcite and conch pearls (conch pearls are not really pearls; they are a concretion – in the manner of a kidney stone, some say).

If you are a jeweler, dealer, collector or private citizen, we buy fine natural gemstones from $1,000 to $1 million.