What’s It Worth? On Diamonds: Cut, Style And Valuation 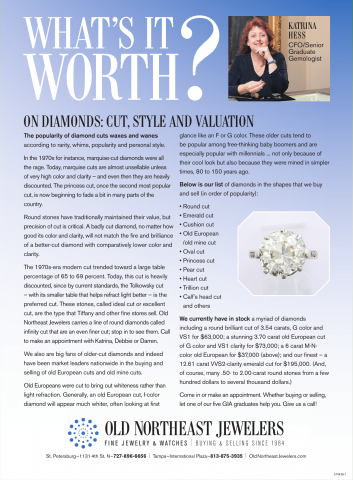 The popularity of diamond cuts waxes and wanes according to rarity, whims, popularity and personal style. In the 1970s for instance, marquise-cut diamonds were all the rage. Today, marquise cuts are almost unsellable unless of very high color and clarity – and even then they are heavily discounted. The princess cut, once the second most popular cut, is now beginning to fade a bit in many parts of the country.

Round stones have traditionally maintained their value, but precision of cut is critical. A badly cut diamond, no matter how good its color and clarity, will not match the fire and brilliance of a better-cut diamond with comparatively lower color and clarity. The 1970s-era modern cut trended toward a large table percentage of 65 to 69 percent. Today, this cut is heavily discounted, since by current standards, the Tolkowsky cut – with its smaller table that helps refract light better – is the preferred cut. These stones, called ideal cut or excellent cut, are the type that Tiffany and other fine stores sell. Old Northeast Jewelers carries a line of round diamonds called infinity cut that are an even finer cut; stop in to see them. Call to make an appointment with Katrina, Debbie or Darren.

We also are big fans of older-cut diamonds and indeed have been market leaders nationwide in the buying and selling of old European cuts and old mine cuts.

Old Europeans were cut to bring out whiteness rather than light refraction. Generally, an old European cut, I-color diamond will appear much whiter, often looking at first glance like an F or G color. These older cuts tend to be popular among free-thinking baby boomers and are especially popular with millennials ... not only because of their cool look but also because they were mined in simpler times, 80 to 150 years ago.