Whats It Worth? Glass, Crass... Or Cash? 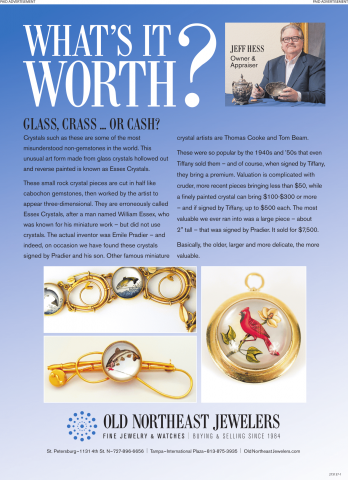 Crystals such as these are some of the most misunderstood non-gemstones in the world. This unusual art form made from glass crystals hollowed out and reverse-painted is known as Essex Crystals.

These small rock crystal pieces are cut in half like cabochon gemstones, then worked by the artist to appear three-dimensional. They are erroneously called Essex Crystals, after a man named William Essex, who was known for his miniature work – but did not use crystals. The actual inventor was Emile Pradier – and indeed, on occasion, we have found these crystals signed by Pradier and his son. Other famous miniature crystal artists are Thomas Cooke and Tom Beam.

These were so popular by the 1940s and ’50s that even Tiffany sold them – and of course, when signed by Tiffany, they bring a premium. Valuation is complicated with cruder, more recent pieces bringing less than $50, while a finely painted crystal can bring $100-$300 or more – and if signed by Tiffany, up to $500 each. The most valuable we ever ran into was a large piece – about 2" tall – that was signed by Pradier. It sold for $7,500.

Basically, the older, larger and more delicate, the more valuable.