What’s It Worth? Hamilton — Leader In Oddly Shaped Watches 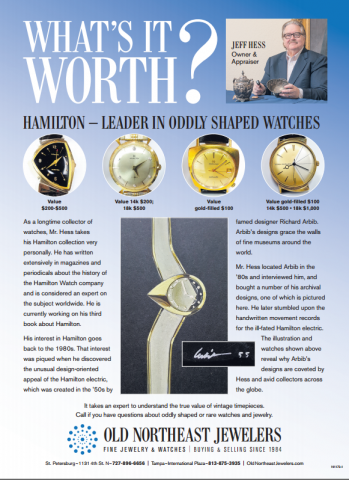 As a longtime collector of watches, Mr. Hess takes his Hamilton collection very personally. He has written extensively in magazines and periodicals about the history of the Hamilton Watch company and is considered an expert on the subject worldwide. He is currently working on his third book about Hamilton.

His interest in Hamilton goes back to the 1980s. That interest was piqued when he discovered the unusual design-oriented appeal of the Hamilton electric, which was created in the ’50s by famed designer Richard Arbib. Arbib’s designs grace the walls of fine museums around the world.

Mr. Hess located Arbib in the ’80s and interviewed him, and bought a number of his archival designs, one of which is pictured here. He later stumbled upon the handwritten movement records for the ill-fated Hamilton electric.

The illustration and watches shown above reveal why Arbib’s designs are coveted by Hess and avid collectors across the globe.

It takes an expert to understand the true value of vintage timepieces. Call Old Northeast Jewelers at 727.898.4377 if you have questions about oddly shaped or rare watches and jewelry.

Comments, questions or suggestions for this column, please send to jeffreyphess@aol.com.