What’s It Worth? It’s All In The Backstory 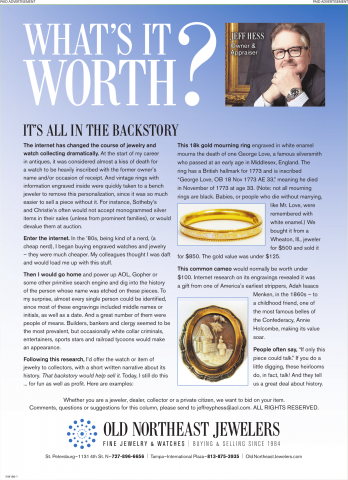 The internet has changed the course of jewelry and watch collecting dramatically. At the start of my career in antiques, it was considered almost a kiss of death for a watch to be heavily inscribed with the former owner’s name and/or occasion of receipt. And vintage rings with information engraved inside were quickly taken to a bench jeweler to remove this personalization, since it was so much easier to sell a piece without it. For instance, Sotheby’s and Christie’s often would not accept monogrammed silver items in their sales (unless from prominent families), or would devalue them at auction.

Enter the internet. In the ’80s, being kind of a nerd, (a cheap nerd), I began buying engraved watches and jewelry – they were much cheaper. My colleagues thought I was daft and would load me up with this stuff.

Then I would go home and power up AOL, Gopher or some other primitive search engine and dig into the history of the person whose name was etched on these pieces. To my surprise, almost every single person could be identified, since most of these engravings included middle names or initials, as well as a date. And a great number of them were people of means. Builders, bankers and clergy seemed to be the most prevalent, but occasionally white collar criminals, entertainers, sports stars and railroad tycoons would make an appearance.

Following this research, I’d offer the watch or item of jewelry to collectors, with a short written narrative about its history. That backstory would help sell it. Today, I still do this ... for fun as well as profit.

Here are examples: This 18k gold mourning ring engraved in white enamel mourns the death of one George Love, a famous silversmith who passed at an early age in Middlesex, England. The ring has a British hallmark for 1773 and is inscribed “George Love, OB 18 Nov 1773 AE 33,” meaning he died in November of 1773 at age 33. (Note: not all mourning rings are black. Babies, or people who die without marrying, like Mr. Love, were remembered with white enamel.) We bought it from a Wheaton, Ill., jeweler for $500 and sold it for $850. The gold value was under $125. This common cameo would normally be worth under $100. Internet research on its engravings revealed it was a gift from one of America’s earliest strippers, Adah Isaacs Menken, in the 1860s – to a childhood friend, one of the most famous belles of the Confederacy, Annie Holcombe, making its value soar.

People often say, “If only this piece could talk.” If you do a little digging, these heirlooms do, in fact, talk! And they tell us a great deal about history.

Whether you are a jeweler, dealer, collector or a private citizen, we want to bid on your item.