What’s It Worth? Sometimes It Just Takes A “Woman’s Touch” 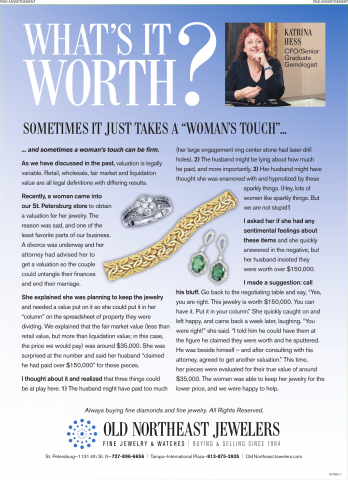 ... and sometimes a woman’s touch can be firm. As we have discussed in the past, valuation is legally variable. Retail, wholesale, fair market and liquidation value are all legal definitions with differing results.

Recently, a woman came into our St. Petersburg store to obtain a valuation for her jewelry. The reason was sad, and one of the least favorite parts of our business. A divorce was underway and her attorney had advised her to get a valuation so the couple could untangle their finances and end their marriage.

She explained she was planning to keep the jewelry and needed a value put on it so she could put it in her “column” on the spreadsheet of property they were dividing. We explained that the fair market value (less than retail value, but more than liquidation value; in this case, the price we would pay) was around $35,000. She was surprised at the number and said her husband “claimed he had paid over $150,000” for these pieces.

I asked her if she had any sentimental feelings about these items and she quickly answered in the negative, but her husband insisted they were worth over $150,000.

I made a suggestion: call his bluff. Go back to the negotiating table and say, “Yes, you are right. This jewelry is worth $150,000. You can have it. Put it in your column.” She quickly caught on and left happy, and came back a week later, laughing. “You were right!” she said. “I told him he could have them at the figure he claimed they were worth and he sputtered. He was beside himself – and after consulting with his attorney, agreed to get another valuation.” This time, her pieces were evaluated for their true value of around $35,000. The woman was able to keep her jewelry for the lower price, and we were happy to help.