What's It Worth? On Sparkling Eyes and Burying The Lead 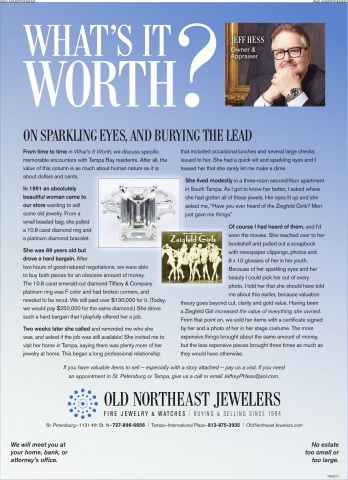 From time to time in What’s It Worth, we discuss specific memorable encounters with Tampa Bay residents. After all, the value of this column is as much about human nature as it is about dollars and cents.

In 1991 an absolutely beautiful woman came to our store wanting to sell some old jewelry. From a small beaded bag, she pulled a 10.8 carat diamond ring and a platinum diamond bracelet.

She was 89 years old but drove a hard bargain. After two hours of good-natured negotiations, we were able to buy both pieces for an obscene amount of money. The 10.8 carat emerald-cut diamond Tiffany & Company platinum ring was F color and had broken corners, and needed to be recut. We still paid over $130,000 for it. (Today, we would pay $250,000 for the same diamond.) She drove such a hard bargain that I playfully offered her a job.

Two weeks later she called and reminded me who she was, and asked if the job was still available! She invited me to visit her home in Tampa, saying there was plenty more of her jewelry at home. This began a long professional relationship that included occasional lunches and several large checks issued to her. She had a quick wit and sparkling eyes and I teased her that she rarely let me make a dime.

She lived modestly in a three-room second-floor apartment in South Tampa. As I got to know her better, I asked where she had gotten all of these jewels. Her eyes lit up and she asked me, “Have you ever heard of the Ziegfeld Girls? Men just gave me things.”

Of course, I had heard of them, and I’d seen the movies. She reached over to her bookshelf and pulled out a scrapbook with newspaper clippings, photos and 8 x 10 glossies of her in her youth. Because of her sparkling eyes and her beauty I could pick her out of every photo. I told her that she should have told me about this earlier, because valuation theory goes beyond cut, clarity and gold value. Having been a Ziegfeld Girl increased the value of everything she owned. From that point on, we sold her items with a certificate signed by her and a photo of her in her stage costume. The more expensive things brought about the same amount of money, but the less expensive pieces brought three times as much as they would have otherwise.

If you have valuable items to sell — especially with a story attached — pay us a visit. If you need an appointment in St. Petersburg or Tampa, give us a call or email JeffreyPHess@aol.com.