What’s It Worth? The Value Of Jade? It’s Complicated 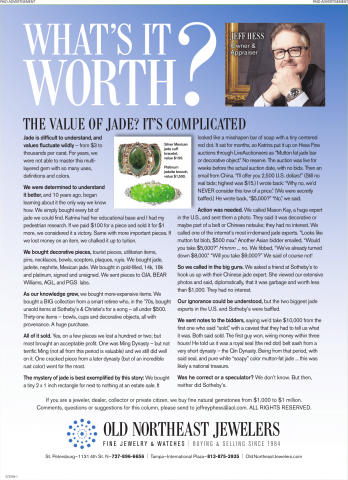 Jade is difficult to understand, and values fluctuate wildly – from $3 to thousands per carat. For years, we were not able to master this multilayered gem with so many uses, definitions and colors.

We were determined to understand it better, and 10 years ago, we began learning about it the only way we know how. We simply bought every bit of jade we could find. Katrina had her educational base and I had my pedestrian research. If we paid $100 for a piece and sold it for $1 more, we considered it a victory. Same with more important pieces. If we lost money on an item, we chalked it up to tuition.

As our knowledge grew, we bought more expensive items. We bought a BIG collection from a smart retiree who, in the ’70s, bought unsold items at Sotheby’s & Christie’s for a song – all under $500. Thirty-one items – bowls, cups and decorative objects, all with provenance. A huge purchase.

All of it sold. Yes, on a few pieces we lost a hundred or two; but most brought an acceptable profit. One was Ming Dynasty – but not terrific Ming (not all from this period is valuable) and we still did well on it. One cracked piece from a later dynasty (but of an incredible rust color) went for the most.

The mystery of jade is best exemplified by this story: We bought a tiny 2 x 1 inch rectangle for next to nothing at an estate sale. It looked like a misshapen bar of soap with a tiny centered red dot. It sat for months, so Katrina put it up on Hess Fine auctions through LiveAuctioneers as “Mutton fat jade bar or decorative object.” No reserve. The auction was live for weeks before the actual auction date, with no bids. Then an email from China. “I’ll offer you 2,500 U.S. dollars!” (Still no real bids; highest was $15.) I wrote back: “Why no, we’d NEVER consider this low of a price.” (We were secretly baffled.) He wrote back, “$5,000?” “No,” we said.

Action was needed. We called Mason Kay, a huge expert in the U.S., and sent them a photo. They said it was decorative or maybe part of a belt or Chinese netsuke; they had no interest. We called one of the internet’s most in-demand jade experts. “Looks like mutton fat blob, $500 max.” Another Asian bidder emailed, “Would you take $5,000?” Hmmm ... no. We fibbed, “We’ve already turned down $8,000.” “Will you take $9,000?” We said of course not!

So we called in the big guns. We asked a friend at Sotheby’s to hook us up with their Chinese jade expert. She viewed our extensive photos and said, diplomatically, that it was garbage and worth less than $1,000. They had no interest.

Our ignorance could be understood, but the two biggest jade experts in the U.S. and Sotheby’s were baffled.

We sent notes to the bidders, saying we’d take $10,000 from the first one who said “sold,” with a caveat that they had to tell us what it was. Both said sold. The first guy won, wiring money within three hours! He told us it was a royal seal (the red dot) belt sash from a very short dynasty – the Qin Dynasty. Being from that period, with said seal, and pure white “soapy” color mutton-fat jade ... this was likely a national treasure. Was he correct or a speculator?

We don’t know. But then, neither did Sotheby’s.

If you are a jeweler, dealer, collector or private citizen, we buy fine natural gemstones from $1,000 to $1 million.