What's It Worth? Why, How & When Tastes Change 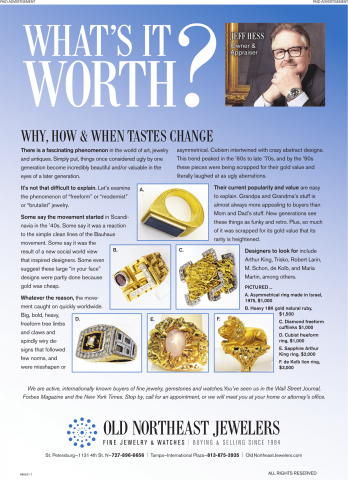 There is a fascinating phenomenon in the world of art, jewelry and antiques. Simply put, things once considered ugly by one generation become incredibly beautiful and/or valuable in the eyes of a later generation.

It’s not that difficult to explain. Let’s examine the phenomenon of “freeform” or “modernist” or “brutalist” jewelry.

Some say the movement started in Scandinavia in the ’40s. Some say it was a reaction to the simple clean lines of the Bauhaus movement. Some say it was the result of a new social world view that inspired designers. Some even suggest these large “in your face” designs were partly done because gold was cheap.

Whatever the reason, the movement caught on quickly worldwide. Big, bold, heavy, freeform tree limbs and claws and spindly wiry designs that followed few norms, and were misshapen or asymmetrical. Cubism intertwined with crazy abstract designs. This trend peaked in the ’60s to late ’70s, and by the ’90s these pieces were being scrapped for their gold value and literally laughed at as ugly aberrations.

Their current popularity and value are easy to explain. Grandpa and Grandma’s stuff is almost always more appealing to buyers than Mom and Dad’s stuff. New generations see these things as funky and retro. Plus, so much of it was scrapped for its gold value that its rarity is heightened.

Designers to look for include Arthur King, Trisko, Robert Larin, M. Schon, de Kolb, and Maria Martin, among others.

You’ve seen us in the Wall Street Journal, Forbes Magazine and the New York Times. Stop by, call for an appointment, or we will meet you at your home or attorney’s office. JEFF HESS, Owner & Appraiser