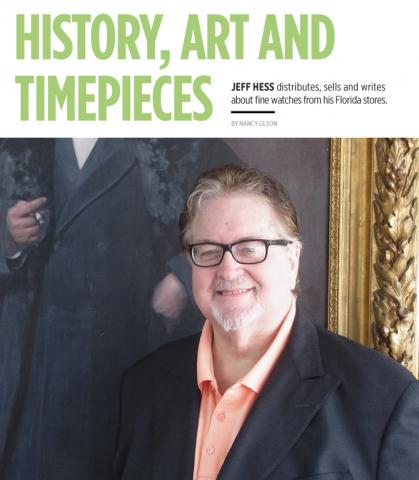 What started as a love of vintage watches and the history that propels them turned into a mission of sorts for Jeffrey Hess, North American distributor of Ball Watches and Mühle-Glashütte, CEO of Hess Fine Art and Old Northeast Jewelers, and avid collector.

“Thirty-five years ago I was working in the finance business and collecting watches,” says Hess of his early years, before watches became his full-time work. His tastes at the time ran to Ball Official Standard Railroad and Hamilton watches, spurred by the rich story and straightforward design of each.

“Later, I concentrated on Rolex and founded a monthly magazine called Watch-It in the late 1980s,” he says, adding that also in the late 1980s, 1986 to be exact, he founded Hess Fine Art, his own vintage watch and auction venue, in St. Petersburg.

Watch-It eventually garnered the attention of Schiffer publishing, which asked him to co-author a book about Rolex. The Best of Time: Rolex Wristwatches, An Unauthorized History, co-authored with watch collector and Rolex expert James Dowling, was released in 1996. Now in its fourth printing, the book is considered the Rolex “bible” among collectors.

Authorship was not new to Hess, since, in addition to his own magazine, he had written for a variety of timepiece-centric publications over the years. But the success of the book did give him yet another credential for his already admirable resume, which by then had “mushroomed,” Hess says, to include the founding of Old Northeast Jewelers.

In the meantime Hess began getting calls testing his interest in distributing various watch brands.

“That business did not interest me until the Ball opportunity became available,” he says.

But with an established love for the brand and its history, it made perfect sense that he should take Ball Official Standard Railroad Watches on as North American distributor, and he did so in 2003. And though it’s been a successful venture for Hess thus far (the brand is now available in about 180 doors), his involvement seems as much a calling as a business opportunity.

“It was the history of the brand and the fact that it was family-owned from 1891 until the 1990s that interested me,” says Hess, emphasizing the rarity of such a long ancestral tenure. “It was American-owned until the current group bought the name, and Ball was selling wristwatches that were cased in America in the 1960s and 1970s. So to keep that flame alive—to be a small part of that—is important to me as a historian.”

He also appreciates the impact the company has made on watchmaking through the technology it’s brought to the table. The Engineer Hydrocarbon, currently in the collection, is one of his favorites because of its cutting-edge design.

“I like the small runs of funky railroad watches we’ve done, too. We produced one for both the Santa Fe and Grand Central [railroads],” he says.
Hess also distributes Mühle-Glashütte, the German brand known for precision measuring instruments. Today’s product range includes wristwatches, marine time systems, marine chronometers and other nautical instruments.

“When I visited the factory and found out they were making speedometers for BMW in the 1920s and nautical instruments since the late 1800s and watches for fifty or sixty years—and it’s still family owned—I became interested,” he says, echoing his own theme. He’s been a fan of the company since the late 1990s and has been importing its watches since 1999.

“Muhle GlashuttePre-owned will always be a factor in the watch business,” says Hess, “because there are people out there who tread lightly and they don’t want to spend the $6,000 to $10,000 necessary for a great watch.” He adds that today’s watches are made to last, and a pre-owned watch can offer good value.

These days, his personal watch collection comprises about 460 new and vintage pieces with a concentration on the cornerstone Ball and Hamilton watches; early Patek Philippe and pocket watches from various makers round out the mix. But Hess’s interest in history and provenance—and his collector’s sensibility—seem to beg a question about his other interests.

“I dabble in car collecting,” he says. “I have a 1953 Arnolt MG by Bertone that came with a watch.” He continues, “Mr. Arnolt’s son sold me his father’s car made in 1953—the same year he bought a Patek Philippe Perpetual Calendar Moonphase.” Apparently, he’d put both of them away. “The watch had never been used and the car had 2,000 miles on it.”