What's It Worth? Breitling: Cool Watches With A Colorful History 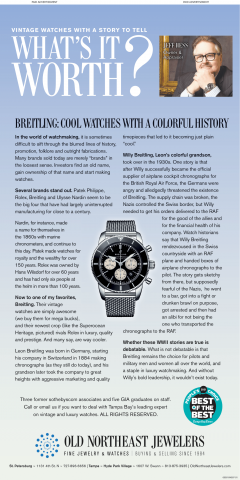 In the world of watchmaking, it is sometimes difficult to sift through the blurred lines of history, promotion, folklore and outright fabrications. Many brands sold today are merely “brands” in the loosest sense. Investors find an old name, gain ownership of that name and start making watches.

Several brands stand out. Patek Philippe, Rolex, Breitling and Ulysse Nardin seem to be the big four that have had largely uninterrupted manufacturing for close to a century.

Nardin, for instance, made a name for themselves in the 1860s with marine chronometers, and continue to this day. Patek made watches for royalty and the wealthy for over 150 years. Rolex was owned by Hans Wilsdorf for over 60 years and has had only six people at the helm in more than 100 years.

Now to one of my favorites, Breitling. Their vintage watches are simply awesome (we buy them for mega bucks), and their newest crop (like the Superocean Heritage, pictured) rivals Rolex in luxury, quality and prestige. And many say, are way cooler.

Leon Breitling was born in Germany, starting his company in Switzerland in 1884 making chronographs (as they still do today), and his grandson later took the company to great heights with aggressive marketing and quality timepieces that led to it becoming just plain “cool.”

Willy Breitling, Leon’s colorful grandson, took over in the 1930s. One story is that after Willy successfully became the official supplier of airplane cockpit chronographs for the British Royal Air Force, the Germans were angry and allegedly threatened the existence of Breitling. The supply chain was broken, the Nazis controlled the Swiss border, but Willy needed to get his orders delivered to the RAF for the good of the allies and for the financial health of his company. Watch historians say that Willy Breitling rendezvoused in the Swiss countryside with an RAF plane and handed boxes of airplane chronographs to the pilot. The story gets sketchy from there, but supposedly fearful of the Nazis, he went to a bar, got into a fight or drunken brawl on purpose, got arrested and then had an alibi for not being the one who transported the chronographs to the RAF.

Whether these WWII stories are true is debatable. What is not debatable is that Breitling remains the choice for pilots and military men and women all over the world, and a staple in luxury watchmaking. And without Willy’s bold leadership, it wouldn’t exist today.

Three former sothebys.com associates and five GIA graduates on staff. Call or email us if you want to deal with Tampa Bay’s leading expert on vintage and luxury vintage timepieces.