What's It Worth? An Important Signature, A Stunning Ruby | Old Northeast Jewelers Skip to main content

What's It Worth? An Important Signature, A Stunning Ruby 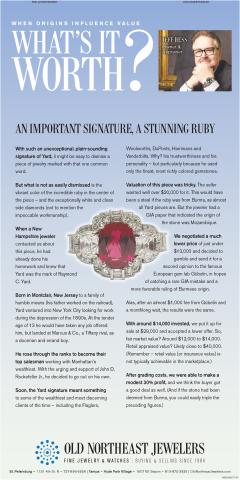 With such an unexceptional, plain-sounding signature of Yard, it might be easy to dismiss a piece of jewelry marked with that one common word.

But what is not as easily dismissed is the vibrant color of the incredible ruby in the center of the piece – and the exceptionally white and clean side diamonds (not to mention the impeccable workmanship).

When a New Hampshire jeweler contacted us about this piece, he had already done his homework and knew that Yard was the mark of Raymond C. Yard.

Born in Montclair, New Jersey to a family of humble means (his father worked on the railroad), Yard ventured into New York City looking for work during the depression of the 1890s. At the tender age of 13 he would have taken any job offered
him, but landed at Marcus & Co., a Tiffany rival, as a doorman and errand boy.

He rose through the ranks to become their top salesman working with Manhattan’s wealthiest. With the urging and support of John D. Rockefeller Jr., he decided to go out on his own.

Soon, the Yard signature meant something to some of the wealthiest and most discerning clients of the time – including the Flaglers, Woolworths, DuPonts, Harrimans and Vanderbilts. Why? his trustworthiness and his personality – but particularly because he used only the finest, most richly colored gemstones.

Valuation of this piece was tricky. The seller wanted well over $20,000 for it. This would have been a steal if the ruby was from Burma, as almost all Yard pieces are. But the jeweler had a GIA paper that indicated the origin of the stone was Mozambique.

We negotiated a much lower price of just under $13,000 and decided to gamble and send it for a second opinion to the famous European gem lab Gübelin, in hopes of catching a rare GIA mistake and a more favorable ruling of Burmese origin.

Alas, after an almost $1,000 fee from Gübelin and a monthlong wait, the results were the same.

After grading costs, we were able to make a modest 30% profit, and we think the buyer got a good deal as well. (And if the stone had been deemed from Burma, you could easily triple the preceding figures.)