What's It Worth? The Mysterious Case of the Priceless Gold Belt | Old Northeast Jewelers Skip to main content

What's It Worth? The Mysterious Case of the Priceless Gold Belt 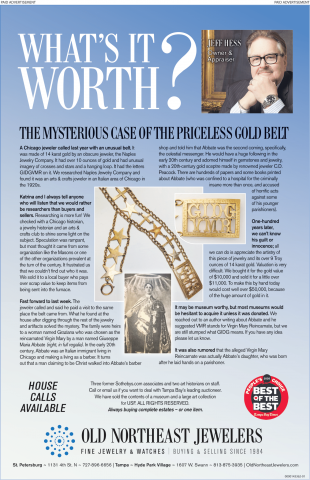 A Chicago jeweler called last year with an unusual belt. It was made of 14 karat gold by an obscure jeweler, the Naples Jewelry Company. It had over 10 ounces of gold and had unusual imagery of crosses and stars and a hanging loop. It had the letters GIDGVMR on it. We researched Naples Jewelry Company and found it was an arts & crafts jeweler in an Italian area of Chicago in the 1920s.

Katrina and I always tell anyone who will listen that we would rather be researchers than buyers and sellers. Researching is more fun! We checked with a Chicago historian, a jewelry historian and an arts & crafts club to shine some light on the subject. Speculation was rampant, but most thought it came from some organization like the Masons or one of the other organizations prevalent at the turn of the century. It frustrated us that we couldn’t find out who it was. We sold it to a local buyer who pays over scrap value to keep items from being sent into the furnace.

Fast forward to last week. The jeweler called and said he paid a visit to the same place the belt came from. What he found at the house after digging through the rest of the jewelry and artifacts solved the mystery. The family were heirs to a woman named Graziana who was chosen as thee reincarnated Virgin Mary by a man named Giuseppe Maria Abbate (right, in full regalia). In the early 20th century, Abbate was an Italian immigrant living in Chicago and making a living as a barber. It turns out that a man claiming to be Christ walked into Abbate’s barber shop and told him that Abbate was the second coming, specifically, the celestial messenger. He would have a huge following in the early 20th century and adorned himself in gemstones and jewelry, with a 20th-century gold sceptre made by renowned jeweler C.D. Peacock. There are hundreds of papers and some books printed about Abbate (who was confined to a hospital for the criminally insane more than once, and accused of horrific acts
against some of his younger parishioners).

One-hundred years later, we can’t know his guilt or innocence; all we can do is appreciate the artistry of this piece of jewelry and its over 9 Troy ounces of 14 karat gold. Valuation is very difficult. We bought it for the gold value of $10,000 and sold it for a little over $11,000. To make this by hand today would cost well over $50,000, because of the huge amount of gold in it.

It may be museum worthy, but most museums would be hesitant to acquire it unless it was donated. We reached out to an author writing about Abbate and he suggested VMR stands for Virgin Mary Reincarnate, but we area still stumped what GIDG means. If you have any idea please let us know.

HOUSE CALLS AVAILABLE
Three former Sothebys.com associates and two art historians on staff.
Call or email us if you want to deal with Tampa Bay’s leading auctioneer.
We have sold the contents of a museum and a large art collection for USF. ALL RIGHTS RESERVED.
Always buying complete estates – or one item.