What's It Worth? Reflections On The Women's Expo | Old Northeast Jewelers Skip to main content

What's It Worth? Reflections On The Women's Expo 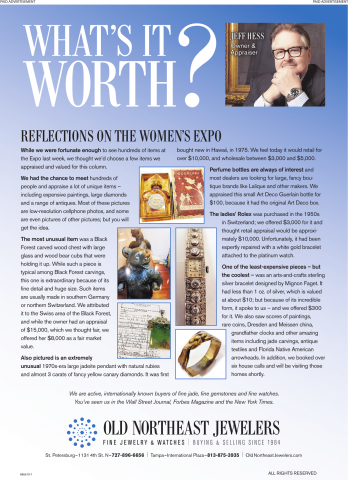 While we were fortunate enough to see hundreds of items at the Expo last week, we thought we’d choose a few items we appraised and valued for this column.

We had the chance to meet hundreds of people and appraise a lot of unique items – including expensive paintings, large diamonds and a range of antiques. Most of these pictures are low-resolution cellphone photos, and some are even pictures of other pictures, but you will get the idea.

The most unusual item was a Black Forest carved wood chest with large glass and wood bear cubs that were holding it up. While such a piece is typical among Black Forest carvings, this one is extraordinary because of its fine detail and huge size. Such items are usually made in southern Germany or northern Switzerland. We attributed it to the Swiss area of the Black Forest, and while the owner had an appraisal of $15,000, which we thought fair, we offered her $8,000 as fair market value.

Also pictured is an extremely unusual 1970s-era large jadeite pendant with natural rubies and almost 3 carats of fancy yellow canary diamonds. It was first bought new in Hawaii, in 1975. We feel today it would retail for over $10,000, and wholesale between $3,000 and $5,000.

Perfume bottles are always of interest and most dealers are looking for large, fancy boutique brands like Lalique and other makers. We appraised this small Art Deco Guerlain bottle for $100, because it had the original Art Deco box.

The ladies’ Rolex was purchased in the 1950s in Switzerland; we offered $3,000 for it and thought retail appraisal would be approximately $10,000. Unfortunately, it had been expertly repaired with a white gold bracelet attached to the platinum watch.

One of the least-expensive pieces – but the coolest – was an arts-and-crafts sterling silver bracelet designed by Mignon Faget. It had less than 1 oz. of silver, which is valued at about $10; but because of its incredible form, it spoke to us – and we offered $300 for it. We also saw scores of paintings, rare coins, Dresden and Meissen china, grandfather clocks and other amazing items including jade carvings, antique textiles and Florida Native American arrowheads.

In addition, we booked over six house calls and will be visiting those homes shortly. We are active, internationally known buyers of fine jade, fine gemstones and fine watches. You’ve seen us in the Wall Street Journal, Forbes Magazine and the New York Times JEFF HESS, Owner & Appraiser