What's It Worth? Worth - In This Business, Sometimes You Just Get Lucky | Old Northeast Jewelers Skip to main content

What's It Worth? Worth - In This Business, Sometimes You Just Get Lucky 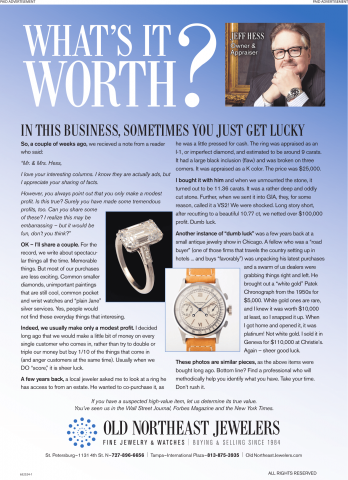 So, a couple of weeks ago, we received a note from a reader who said:

“Mr. & Mrs. Hess, I love your interesting columns. I know they are actually ads, but I appreciate your sharing of facts. However, you always point out that you only make a modest profit. Is this true? Surely you have made some tremendous profits, too. Can you share some of these? I realize this may be embarrassing – but it would be fun, don’t you think?”

OK – I’ll share a couple. For the record, we write about spectacular things all the time. Memorable things. But most of our purchases are less exciting. Common smaller diamonds, unimportant paintings that are still cool, common pocket and wristwatches and “plain Jane” silver services. Yes, people would not find these everyday things that interesting.

Indeed, we usually make only a modest profit. I decided long ago that we would make a little bit of money on every single customer who comes in, rather than try to double or triple our money but buy 1/10 of the things that come in (and anger customers at the same time). Usually when we DO “score,” it is sheer luck.

A few years back, a local jeweler asked me to look at a ring he has access to from an estate. He wanted to co-purchase it, as he was a little pressed for cash. The ring was appraised as an I-1, or imperfect diamond, and estimated to be around 9 carats. It had a large black inclusion (flaw) and was broken on three corners. It was appraised as a K color. The price was $25,000.

I bought it with him and when we unmounted the stone, it turned out to be 11.36 carats. It was a rather deep and oddly cut stone. Further, when we sent it into GIA, they, for some reason, called it a VS2! We were shocked. Long story short, after recutting to a beautiful 10.77 ct, we netted over $100,000 profit. Dumb luck.

Another instance of “dumb luck” was a few years back at a small antique jewelry show in Chicago. A fellow who was a “road buyer” (one of those firms that travels the country setting up in hotels ... and buys “favorably”) was unpacking his latest purchases and a swarm of us dealers were grabbing things right and left. He brought out a “white gold” Patek Chronograph from the 1950s for $5,000. White gold ones are rare, and I knew it was worth $10,000 at least, so I snapped it up. When I got home and opened it, it was platinum! Not white gold. I sold it in Geneva for $110,000 at Christie’s. Again – sheer good luck.

These photos are similar pieces, as the above items were bought long ago. Bottom line? Find a professional who will methodically help you identify what you have. Take your time. Don’t rush it.